“Ready to run?” I ask, looking directly at Summer. A grimace crosses her face and she clutches her camera closer to her chest. We are still two or three minutes from Union Station – southbound on the gold line. A flash of lightning illuminates the sky, startling us. A rapturous clap of thunder follows. Andrea, a Lincoln Heights local with pink curly hair, three inches of dark regrowth, plug earrings and a polished leopard-print upper lip piercing, squeals with excitement. None of us can remember the last time a storm like this came through Los Angeles.

Andrea introduces herself, taking care to roll the ‘r’ in her name each time she shakes a new hand. Summer shuffles nervously in her seat and checks the time again. Our train home leaves Union Station in exactly four minutes and we are still not slowing down. A treacherous layer of mist hovers between the downtown buildings. Rain continues to fall in thickets and the clock ticks closer and closer to 4:40.

At last the train slows to a stop. With a wave to Andrea we are off, weaving between passengers on the platform. Down the stairs – two at a time – and we are running up the tunnel. “Platform 8-B,” Summer yells to me. We skid past the sign for Platform 8 and up the tunnel to the Orange County line. With a final push we race onto the platform, leaping onto the lingering train. We fall into our seats, out of breath as the train pulls away from the station, finally heading home.

Seven hours earlier, Summer and I stuff our $10 day-passes into our jacket pockets and board the 9:30 a.m. weekend train at Buena Park, heading downtown. The metro’s blue line actually connects at Norwalk station and we could have saved $5 on our tap cards, but we were unaware of our mistake until much later in the day. Nevertheless, a few miles into the trip we can already see the low, morning clouds clinging to the buildings downtown. They leave a dampened silhouette of the city over the rooftops of the factories we are passing.

We pass over the mess of traffic that is stuck on the I-5, battling the damp conditions and, crossing the LA canals, the tracks curve right and run alongside the gushing river of dusty, polluted storm water. Speckled rain litters the window to my right, streaking down the glass as the train moves in smooth, swift contrast to the stationary traffic.

As the old stone bridges of the numbered streets pass overhead the train slows and we veer toward Union Station. Dodger Stadium looms large to our right, barely hidden behind the hills of East LA and the train jerks to a halt. The towering downtown buildings are no longer clouded by a distant mist, but are clearer as we sit in their ominous late-morning shadows. Switching trains, courtesy of our day-pass, we take the gold line south to the Arts District and walk to Umami Burger. The Truffle Burger is exceptional, as always – it is an LA burger scene classic that can be found at any one of their 15 Southern California locations. The sweet potato fries, garlic aioli and glass-bottled Mexi-pop provide the perfect compliment to our satiated appetites.

Our lunch cravings satisfied, Summer and I set off for downtown on foot. We pass through the gorgeous streets of Little Tokyo, experiencing some of LA’s cultural diversity. As the storm intensifies and the rain becomes torrential, it is increasingly obvious that we need to find more permanent shelter than simply racing eave to eave along Spring Street.

Loud crashes of thunder echo down from the heavens as we find yet another temporary shelter beneath the awning of an old hotel. The luminescence of the awning’s 40 tungsten-lit bulbs provides a soft contrast to the darkness loitering ominously above. The rain is unrelenting, but we press on in search of the one thing that can make everything better: coffee. A block further we pass a convenience store and Summer ducks in, emerging a minute later with a small black umbrella. We huddle beneath it and continue to explore the flooded downtown streets, pressing on towards the newly renovated Ace Hotel.

As we approach the hotel, I catch a quick glimpse of the “Jesus Saves” sign that now sits atop The Ace’s western roof. Even from Broadway the neon-red lettering is a beacon of light amidst the darkness of the city and clouds. We jostle our way into the foyer and remove our saturated coats. I order a latte and Summer gets her coffee black.

Climbing to the mezzanine, we find ourselves overlooking the café floor and the flooded Broadway outside. A constant stream of chatter rises from the café below where we sit. My dialogue with Summer quickly turns to the current revival in downtown LA that is being stimulated by a thriving arts and culinary scene. The stampeding gentrification process is led by upper-middle class businesses moving in to replace the rows of second-hand jewelers and pawn shops that have inhabited the land for so long.

Urban Outfitters, one of the poster children for the rebirth, has found a trendy new home in the renovated Rialto Theatre, while droves of café and restaurant owners are making their way west from the arts district and other parts of the city to take advantage. Behind our seats, a long ‘communal table,’ fashionable in the modern café scene, leads strangers into forced interactions, and a small chorus of “Happy Birthday” breaks out from one end.

I order another coffee, to go, and we set back out onto the windy streets, moving quickly back up Broadway. We walk by a long line of people waiting for the bus under the shelter of the crowded shopfronts and a little farther, a small crowd has assembled around one man who is preaching to them. We continue past the small gathering and after a few blocks head into Pershing Square station. Our daily passes good for use on all the connecting metro lines, we board the purple line back to Union Station and find ourselves staring at the metropolitan map. We trace our adventure north towards Pasadena and wait to board by the gold line track.

The metro is extremely efficient, with trains passing through each station every 6-10 minutes. Northbound, the line winds its way through the north-eastern suburbs of LA. Passing Chinatown, smoke billows from large chimneys, spiralling upward until it is imperceivable from the dense fog settling in over the city.

A little farther, the tracks drop below the surface into a small tunnel. Re-emerging, we speed between the densely populated hills of Montecito Heights and Cypress Park. On the train a poster of Yasiel Puig and Hanley Ramirez, two of the Dodgers’ franchise stars, is strategically placed to encourage passengers to utilize the metro system this summer for the team’s home games.

By the time we arrive in Pasadena it is already close to 3 p.m. No longer in the threatening shadows of high-rise buildings, but now wandering through the streets of Old Pasadena at the foot of the Angeles National Forest mountains, LA’s diversity in landscape is perfectly personified.

In less than an hour you can catch the metro from the beach, through the heart of the second most populous city in the country, to the base of the mountains. The streets outside the station are wide and lined with trees, drawing pedestrians’ eyes away from the row of multi-story garages, apartment complexes and office buildings that also line the street.

In an attempt to once again avoid the rain, we head for Intelligentsia, a notoriously delicious purveyor of coffee and baked goods. I am already restless from my excessive consumption of roasted Stumptown beans, but Summer is in dire need of another caffeine fix. Her shoes are soaked, her jacket is drenched and to make matters worse, I left her new umbrella on the train.

Customers move in and out of the busy café – some alone, others with friends, some to stay, others to go. Next door, Indiana Colony houses three businesses in their retail space – The Pie Hole, Pressed Juicery and Coolhaus. The Pie Hole supplies a delicious array of pies and coffees. Yards away, Pressed Juicery provides juices and green cleanses, while Coolhaus, in their own words, serves “architecturally inspired ice-cream sandwiches.” All three proprietors are successful as they are able to integrate their businesses with one another, attracting a range of customers who are able to take advantage of the variety of options within the shared space.

Inspired and refreshed, we trek back to the Del Mar station and wait for the train downtown. The station’s architecture is carefully crafted, its entrance appearing through a subtle alleyway and arched entry. The train approaches from the north, lights first, through the tunnel and then rattles into the station. When we board and sit down, a girl with curly pink hair and three inches of regrowth sits opposite us and muses about the rain while talking on her iPhone. I check the time. “We’re going to be cutting this close,” I tell Summer. “The last train leaves for home at 4:40…” 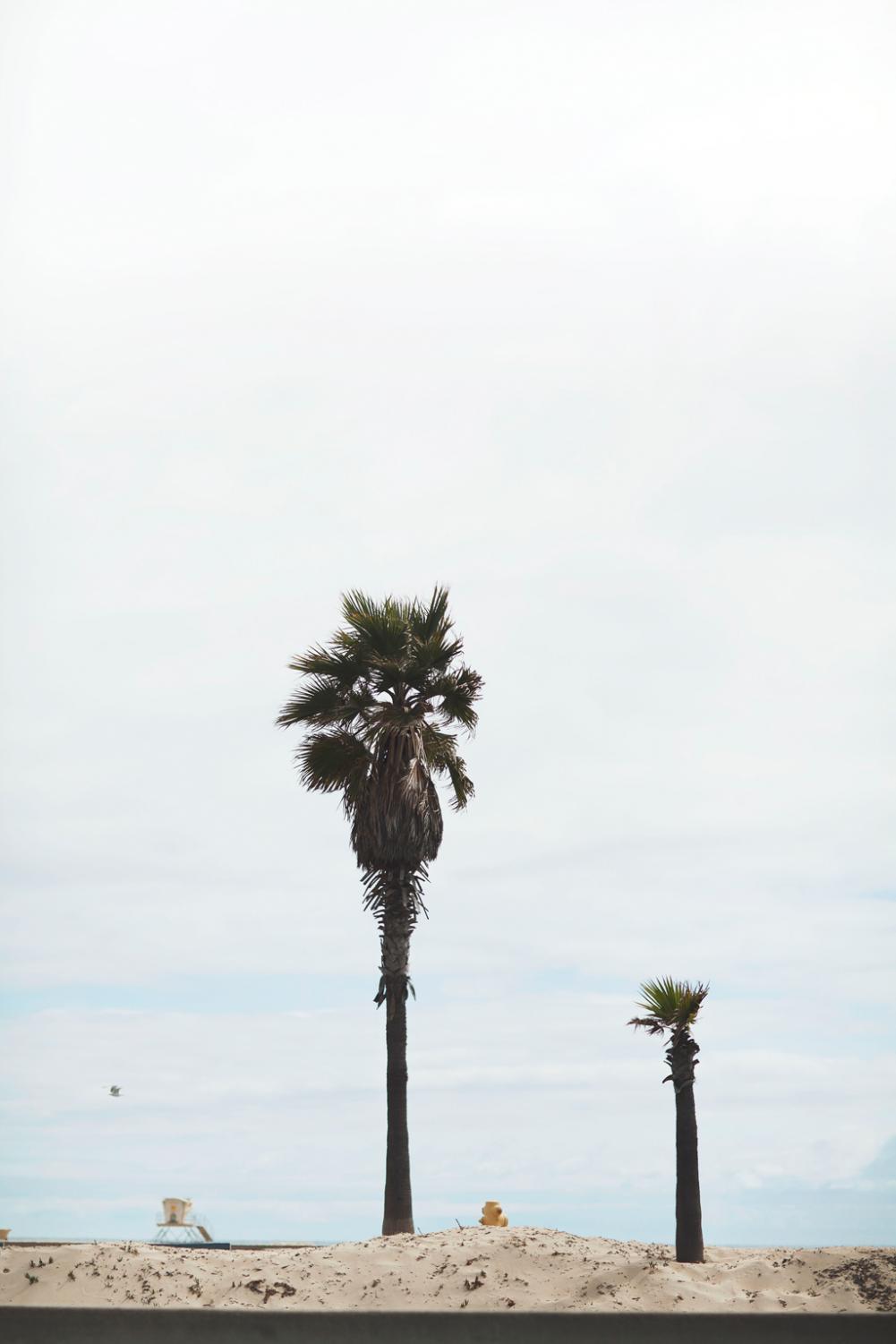 Bigger House on the Coast