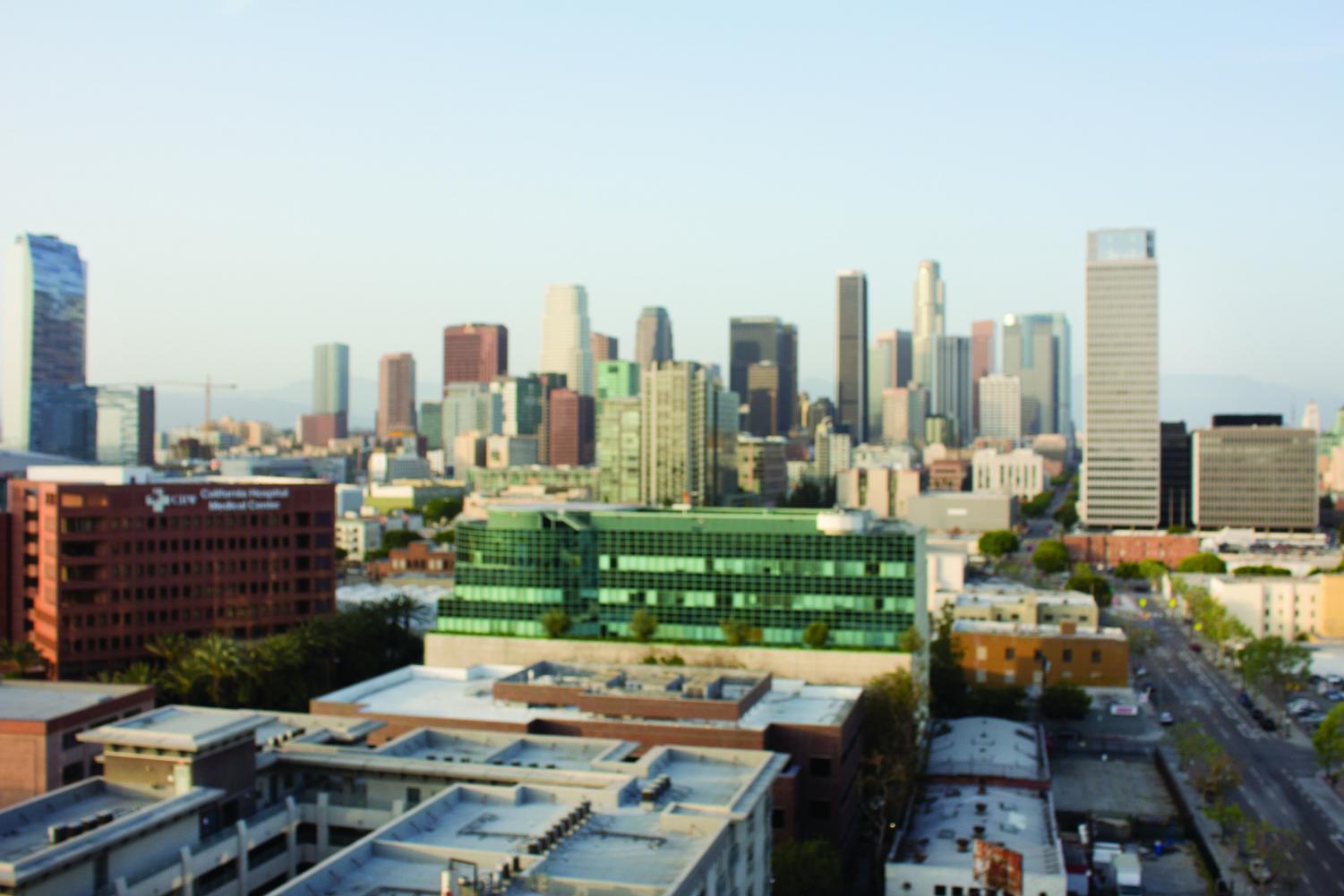 Brenda Velasco had known since age seven that she wanted to be a corporate attorney. She had a plan to achieve her dream job by 25, get married at 27 and have kids at 32. Instead, Velasco graduated from Biola in 1999 and went on to work in communications and marketing at a real estate agency in Whittier, and after some twists and turns, she ended up in the position of assistant director with Biola’s University Communications and Marketing. This is not at all what she had planned

Some students embark on a different career path because of the decisions they make, while others have no choice in the matter. Erin Arendse is a 2010 Biola graduate who obtained her degree in English. She had plans to go to grad school in Michigan or Ohio and eventually teach English at the university level. However, she did not get into grad school. Right now, she is working as the administrative assistant for Biola’s philosophy, English and humanities department — not exactly the avenue she envisioned.

Velasco and Arendse were not the first people to wrestle with their career paths in the days looming before graduation day, and they will certainly not be the last. Most Biola students approach graduation with expectations, whether that is finding the perfect career, making a large salary or being able to qualify for their dream job.

However, according to a survey conducted in November 2012 by the professional networking site LinkedIn, only 30.3 percent of people fulfill their childhood dreams. The other 69.9 percent have the pleasure of their ideas, dreams and plans being flipped upside down and completely jumbled so that they must reassemble everything they thought they knew about what they wanted for their lives. Whether by choice or circumstance, the majority of people change their career paths to something they had not anticipated.

During her senior year, Velasco questioned whether her “dream job” actually matched how she imagined her life. She liked the idea of being a corporate lawyer, but realized that the future is not just about a job — it is about what type of person you want to be and the type of life you want for yourself.

“I had to figure out if it was truly God’s calling on my life or my own calling on my life because I had wanted it so badly,” says Velasco. “Through that process God showed me that it wasn’t necessarily what he had planned for me, and that if I truly wanted certain things in life like a family and a career that wasn’t so stringent and so bound by politics, then corporate law was not for me.”

God guides us to an understanding of his plans for us in different ways; to some he changes their desires, but to others he takes them on a long learning journey. Cambria Aviles was a history and English double major who graduated in May 2011. Currently she is working two different part-time jobs within Biola’s administration. Aviles loves working at Biola, but knows it is just a stepping stone of experience on her journey to the perfect job. Having graduated so recently, Aviles both saw and experienced the shock that she and her friends had to deal with when they realized their expectations were not the reality. Aviles shared the general assumption she and her peers held — that they would go to school, get a degree and obtain an entry level career job right after graduation.

“[Instead] I was juggling part-time jobs and it wasn’t what I envisioned,” says Aviles. “That was the case with probably 80 percent of my friends. Through those experiences, though, they have discovered different strengths and skills and different passions they weren’t aware of when they were thinking of what they wanted to do after they graduated.”

Such was the case with Don Bernstein, manager of Biola’s Alumni Relations. He always wanted to be an architect, but realized as he got older that it was not architecture he loved: it was the skills involved in practicing architecture.

“My experience tells me that God loves us so much and puts desires in our hearts,” Bernstein said. “I honestly think he puts desires in our hearts in elementary school through high school that actually give us a lot of clues about what we love to do. Those particular desires can be fulfilled in many ways … I found it very satisfying not to get the job title, but [instead] to use my gifts and desires.”

As Bernstein points out, it is important to first realize the different talents you possess and how you can utilize them, and then figure out a job that matches that, instead of the other way around. Biola’s Center for Career Development helps students identify their gifts and desires so they may gain insight on choosing a career path. Director Jeanie Jang helps students compare their dreams with their skills, and then assists them in figuring out how to prepare for that dream.

“Your personality may not match what you want to do,” Jang says. “You don’t know necessarily up front if [your dream job] sounds good because of the reality of what it takes to do that … but you won’t know until you try it. Unless you start getting exposure to what your work is like, then you’re just guessing.”

Jang says now is a good time to explore what you like and gain an understanding of what your dream job actually takes. She stresses the importance of getting internships while you have the chance, since most internships are only available for college credit. In addition to exploration, internships play a vital role in boosting a résumé and helping college students obtain a job after graduation. In 2012, Career Development conducted a survey of Biola’s graduating seniors and found that only 30 percent graduated with jobs. Of the 30 percent that had jobs, 65 percent had completed an internship during their college career. The problem for the 70 percent who were not able to track down work is the current job market. Jang says students have to meet a high hiring standard that is practically impossible to reach with a fresh diploma and little to no career experience.

“When I hire my student workers, they all have … a certain exposure to work and writing,” Jang says. “I’m not willing to hire someone with no exposure to work; outside [of Biola, in the real world], the bar is even higher.”

Nowadays students naturally expect to get low-paying, entry-level jobs because that is all they are qualified for without years of hands-on experience. They need to put in their time doing the grunt work, the not-so-fun jobs, so they can work up to what they really want to do. Sometimes even entry-level positions are hard to find though. Seniors must recognize that to stay afloat they might even have to do something completely unrelated to their career field for a while before they can get their foot in the door.

“I used to think that it was really important to find the right job and make a ton of money,” says senior communications major Julia Bates. “But I’ve been realizing that you have to start somewhere, so I’ve been looking at receptionist jobs or jobs that may not necessarily be awesome. I may be working at Starbucks, who knows.”

Soon after saying this, Bates accepted a position as a team leader at the Target store in Norwalk. Bates, who was referred to the position by a friend, says having connections was the key to securing a job right after graduation.

Students have to work hard and utilize their available resources to succeed. Entering the real world is not all sunshine and rainbows when you have little experience, few connections and a weighty amount of debt following you around. Senior film major Paul Maertens understands that everyone has to start somewhere and he is willing to do anything when he graduates, so long as he can support himself.

“My expectations are really low,” Maertens says. “What I need to do is afford myself and my loans … I don’t need a lot so if I can find something fairly stable, I don’t care how hard I’m working.”

Arendse is no stranger to these circumstances. Upon her graduation from Biola in 2010, she started looking furiously for a job — any job. She says it seemed like there were no positions anywhere. She resorted to using a temp agency that placed her in a job working for a company that conducted gas station repairs and fire code testing. It was not ideal for Arendse, but she knew it was preparation for the next step in God’s plan.

“In the job I had that was not satisfying, some of it was an attitude check,” she says. “You have to pay your dues and get experience in this world and go to work the next day because you have rent to pay. There was this really strong conviction from God saying, ‘Hey, you have a job I have blessed you with. I have you here for a reason.’ Even though I hated it, I was saying, ‘Okay, God, thank you for this job, make me thankful, but I am so ready for what you have next.’”

Bernstein confirms that Arendse’s journey is similar to that of most graduates: it may take a long while to get to the point of achieving your dream job. “Nobody’s life is a straight line from point A to point B — that is a given,” he says. “However, we know and we trust that God is involved in every aspect of our lives. If we are on a trajectory from A to B, and God takes us through C, D, and E on the way to B, and because we trust in his sovereignty and he provides in ways that we don’t even expect, we can be satisfied and content with that if we have the big vision in mind.”

Success is not always going to be achieved in expected ways. Bates describes the idea of success by the world’s standards as having a 9-5 desk job that makes a six figure salary. However, Biola students and alumni define success differently. Aviles views success as being able to utilize the gifts the Lord has given her, no matter where she is at. It is about thriving in your position and taking advantage of the opportunities it presents, whether or not the job is ideal.

Success does not only involve contentment and utilization of where you are, though. Samantha Payne, a 2009 graduate who recently received Biola’s Young Alumni Award, believes that success is not just an end goal, but a process. Payne studied psychology during her time at Biola, but is now a program director for Teach for America. By the world’s standards, Payne has arrived at the point of success. Even though Payne loves her job, she still wishes to grow more and become a marriage and family therapist. There is not a point that once you reach it you have attained success.

Growth is the key to having a successful and satisfying career. Even now, there is always room for personal growth that allows us to draw closer to realizing our passions. Coming from the perspective of someone who altered their passions, Velasco says to have an open mind about which path God is going to lead you on. If you are so focused on one idea, you may limit what God has for you.

“My advice would be not to confine yourself to a specific career goal because you may be missing out on a much better profession that you never imagined,” says Velasco. “I would just encourage [students] to explore, take as many opportunities as you can. Network, because that is going to make a difference. Interact with professionals and learn from them and don’t be afraid to take a risk in your professional career, because all of those are learning opportunities.”