“I’m using my art to create human mirrors where my country can see themselves.”

I believe there is no greater way of influencing a thinking and feeling species than by causing them to think and feel … we feel the need to understand who we are as well, and the things that make us who we areI would like for us as a country to talk more about our art as it currently exists in our culture, the role it plays, but also the role it could play is a Ugandan recording artist and songwriter. Through her music she aims to bring awareness to the beauty of art and the woman, the importance of believing in yourself and the presence of artistic Ugandan potential.

In her music, Twongyeiwe hopes people will see her, the artist, and the story she tells.

“I want people to see me as I am. I am black. I am African from a country that was colonized by a European country,” Twongyeiwe said. “I want people to understand the blessings and struggles that come from that. I am female, and that means different things in my own African culture and in a global context—and that has its blessings and struggles too.”

Twongyeiwe wishes that those who listen would understand she wants the same things many people do. In all her humanity, fallibility, desperation and hope, she desires to be perceived in the simplicity and simultaneous complexity of “being human.”

“[I want to bring awareness to] the so many amazing Ugandan artists that are there and no one knows or cares about,” Twongyeiwe said.

Twongyeiwe believes that music provokes deep reflection of one’s self and that this can only occur when we begin to understand the importance of music.

“I would like for us as a country to talk more about our art as it currently exists in our culture, the role it plays, but also the role it could play,” Twongyeiwe said.

Much of Twongyeiwe’s music is centered around her upbringing in Uganda. She also attributes her passion for music to the strong musical culture of Uganda.

“Music is such a huge part of the way of life for most Ugandans. Traditionally and historically, music was a way to encode history and pass it on. It was a way to teach children life lessons and instill a moral standard within society,” Twongyeiwe said. “[Music] is still such a big part of our culture. It makes it one of the most effective tools of influence, as more people are likely to come into contact with it.”

Twongyeiwe uses music to tells stories, share lessons and have a cultural and societal influence. Music, she said, then becomes a reflection of the person.

“When we see ourselves, we will be forced to feel and think, to explain our feelings and make conclusions about our thoughts. I believe and dream that maybe art can be a mover that equips and inspires us as Ugandans,” Twongyeiwe said. “To do what is inherently entrenched within us, to think and feel with our words, and dance—to our music and especially our stories.”

For Twongyeiwe, music is a powerful tool that can be used to heal and shape people in a true way.

“I want to bring awareness to the strength and influence of art for [Uganda] as a country. I would like us to remember why music was so central to us. It taught us. It was social commentary. It chastised and encouraged us culturally, and that changed society for the better many times,” Twongyeiwe said. “I believe, even now, it can do the same, if we as a country would be more open to receiving art that was specifically made for us to think deeper and feel more strongly.”

Twongyeiwe believes that music as an art form appeals to both the mind and heart in ways distinct from other art.

“I believe there is no greater way of influencing a thinking and feeling species than by causing them to think and feel … we feel the need to understand who we are as well, and the things that make us who we are,” Twongyeiwe said. “We are disturbed by the inconsistencies revealed and are restless until there is an explanation.”

The explanation of ourselves, Twongyeiwe proposes, rests in our perception of music.

“The means to the understanding of ourselves takes many forms, but also art, and a rather specific contribution when it comes to music [especially] when you look at our culture and society today,” Twongyeiwe continues. “That’s also why music is one of the media of influence I use.”

When asked what she would like for those who encounter her art to get out of it, her response was simple.

“Hope. I want people to think about the decision to hope that they have,” Twongyeiwe said.  “I want people to feel they have hope around them, not just because it is a great thing to have generally, but because I am convicted about its usefulness in my own life and for myself.” 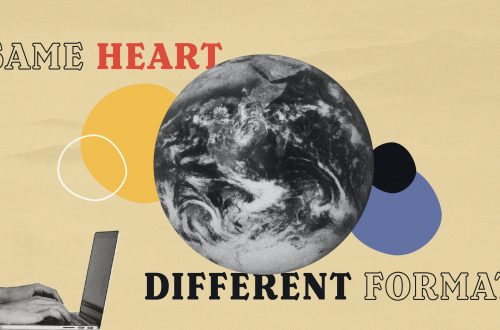 Missions in a Locked Down World: Same Heart, Different Format

Women Protest for Peace in Yemen