If everything had gone according to his plans, Seth Wegter would currently maintain two homes: one in Seal Beach and the other in Washington, D.C. As a California senator, he would be helping to improve the home state in which he has lived his entire life.

But as an English teacher and head wrestling coach at Wilson Classical High School in Long Beach, a professor of critical thinking and writing at Biola University, and a designer of his own handcrafted bag line, Wegter says God has clearly paved a different path than expected.

“Everything I thought would be the case, God said ‘No,’” Wegter says. “Instead of being disappointed, I learned to rely on God.”

After 3 years of preparing for law school at Cal State University Long Beach, Wegter’s passions changed. He took a few education courses, taught a few high school classes, and knew where God was really calling him: the classroom.

Home-schooled until high school, Wegter always wanted to be taught a certain way, so he decided there was no better way than to take it into his own hands.

“If I didn’t do it,” he explains, “I couldn’t tell them to.” By working alongside them, he establishes the authority in telling them to do it. He reminds his students that if he can juggle four separate jobs, they can handle any assignment he gives them.

Wegter never intended on designing and crafting handbags to become a full-scale job. As an artist, he began selling canvas bags on a whim for extra cash and was surprised by the overwhelming reception. When he began crafting with leather as well, the popularity of his line skyrocketed.

When large companies offered to carry his line, he refused because he would no longer be able to design and create every bag by hand. Since he didn’t feel that was in God’s plan for him at the time because of all his other commitments, he didn’t try to expand the business any further.

He continues to create satchels, purses, briefcases and handbags out of various materials, all by hand, customized for the client.Within each bag, Wegter includes an original piece of creative fiction as well as a Bible verse as a small witnessing tool to all of his clients.

Even with such a full schedule, Wegter says he lives in the moment. When asked what his ultimate goal is, he remembers what his mom always said: “Never get preoccupied with the end, because it only leads to disappointment.”

Rather than a dream job, he looks forward to being in heaven with God. In the meantime, he remains focused on the increasing number of young minds that he has the opportunity to mold. When he first arrived, the wrestling team at Long Beach Wilson had 15 boys. Seven years later, Wegter has recruited 100 wrestlers and his team is now a top five team in the district.

He uses his time both as a teacher and coach to set an example of God’s light and love.

“You have to be careful, ambiguous and strategic with faith,” he says about teaching at a public high school. While he cannot preach or specifically define his faith, he creates a unique, clean environment without cussing, partying, or any other negative influences for a teenager. He allows his example to demonstrate his faith.

Immersing himself in four different worlds every day takes much of Wegter’s energy, but he remains optimistic.

“There’s always time. I use all my time to further God’s kingdom,” he says. He uses every facet of his life to spread God’s light.

“For many, [evangelism] looks like going to Botswana,” Wegter says. “For me, it’s sewing, coaching and teaching.”

Freshly graduated with an undergraduate degree in biology, the last thing John Mauch expected was to be taken on as adjunct faculty at Biola. He anticipated a job as a teacher’s assistant or some other menial position until he graduated Talbot and went to medical school. But before he knew it, he was facing a class full of freshmen embarking on their journeys of pre-medicine and biochemistry.

Enthusiasts of the sciences, Mauch and his high school friends always aspired to become doctors. His empathetic spirit coming from his own life experiences as an emergency medical technician also destined him for the medical field.

“There’s an evil in suffering, and a doctor can reduce that evil,” he says. “That’s a gift from God.”

Working as an EMT is Mauch’s way of gaining experience during his time teaching until he goes to medical school. Since his final year as an undergrad at University of California Davis, he has been an EMT, working at soup factories in case of an accident, and at bars or clubs where he’s seen countless drug overdoses and injuries from fights.

Even though he did poorly on his first MCAT as an undergrad, it led him to teach, and though he didn’t get into medical school right away, he still has a place at Biola.

“There are things I wish happened differently,” Mauch admits, “but they didn’t.” Despite his setbacks, he has always had the opportunity to remain at Biola, a comfort and reminder that God is in control.

It may be difficult to imagine going from a biological sciences undergraduate to graduate school in theology, but Mauch felt it was important to bridge the gap between the Bible and sciences.

“Theology and biology complement each other more than they contradict each other,” he says. Mauch’s background in theology has proven helpful in many conversations with other scientists or doctors about hot topics like evolution, stem cell research and abortion.

“Biology integrates with Christianity,” he said. “If it doesn’t, there’s something wrong with biology.”

Mauch was first introduced to Hope Chapel in Redondo Beach through his roommate during his time at Talbot. Since then, he’s been attending the twenty-somethings group, and after graduating Talbot last spring, he now hopes to put his master’s in theology to use by pastoring there.

Outside of teaching, ministry has taken priority in Mauch’s life. Mingling and building relationships with the 160 attendees of the college-age group at Hope has stirred in him a desire to preach. He has been working on sermons that he hopes to deliver every so often to the group that he has become so close with over the last few years.

Although his original plans were to go straight to medical school after graduating Talbot, Mauch says, “God plans our lives in ways we don’t expect.” He’s learning to wait on God in the midst of whatever comes his way, and to trust that God will direct him down the correct path.

As if keeping up a home, raising and home schooling triplets and maintaining two businesses was not enough, Laureen Mgrdichian has recently been promoted to full-time professor at Biola, taking on an extra six units in the Crowell School of Business.

Graduating from Biola with a communications major in 1980 groomed Mgrdichian for personal relationships, both in the classroom and in the business world. She says that she “prefers the people side of business over numbers.”

While getting her MBA in Marketing and Organizational Development at UCLA, Mgrdichian began baking cookies for her friends and study groups. From there, she began Lucy’s Cookies, named after her mother, selling primarily to corporate companies during the holidays. Although she knows her growing family cannot afford for this to be a full-time job, she thrives on the relationships that she builds both with individuals and with corporations.

“I’m constantly amazed by how things turn out and how God was always behind the scenes,” she says, describing the surprising success of her cookie business. Running this business is an outlet for her to relax and take a break from lesson plans or running her kids around town. However, juggling three things was not enough for Mgrdichian.

“I’ve always been eclectic and get bored really fast,” Mgrdichian says, explaining how she ended up with so much on her plate.

While raising her triplets, Mgrdichian became unsatisfied with the minimal options for children’s entertainment, so she and her friend, a mother of two, set out to keep their kids’ attention while still stimulating their minds. Combined with the skills of her music producer husband and creative director brother, this idea became a reality. Calm Baby is a video with water-based visuals and classical music aimed at relaxing babies between 0 and 36 months, before they can be entertained by shows like Sesame Street or Dora the Explorer.

Calm Baby is distributed through Amazon and Toys ‘R’ Us stores throughout the United States as well as in Japan, and within its first two years, it was awarded the Video of the Year Award by Parenting magazine.

“I have no idea what God has in store,” Mgrdichain admits when speaking of the future of Calm Baby, Inc. She does, however, continue to work at making new material for videos, CDs and even toys, hoping to branch out and develop the line further. It was experience particularly through her two companies that has helped Mgrdichain thrive as a professor for the last 25 years at Biola.

“I’ve always liked teachers who aren’t full-time teachers,” she says. “They brought a different edge to the classroom.”

Despite having the title of a full-time teacher now, Mgrdichian still keeps up both Calm Baby, Inc. and Lucy’s Cookies, bringing her experience from the business world into the classroom. 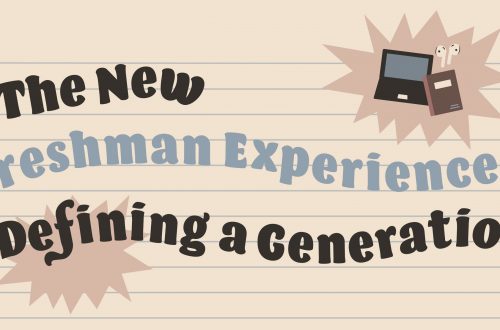 The New Freshman Experience: Beginning College During a Pandemic